estamen
KLT
Download the KLT App here for an ad-free viewing experience:
iPhone & iPad
* https://apps.apple.com/us/app/kids-learning-tube/id1491094573?ls=1
* https://tinyurl.com/swsndce
Android Phone and Tablet
* https://play.google.com/store/apps/details?id=com.w35ef400ff78.www
* https://tinyurl.com/vl5ctf5
Learn about the 5 Oceans of the World, Pacific, Atlantic, Indian, Arctic and Southern with this fun and educational music video! Brought to you by KLT! And don’t forget to sing along!

Support KLT by becoming a Patreon today at the link below! You can vote for the video of the week, get your name in the credits and supports something you believe in! https://www.patreon.com/kidslearningtube

Lyrics:
We’re One Global Ocean Broken Up Into 5
We cover Oceans Cover 71% of the Earth into this we’ll dive

I’m bounded by the continents Asia and Australia in the West
And to my East, you see The Americas
This is where they rest

My names the Arctic Ocean
the smallest of the 5 you know
About 5.5 Million Square Miles
of the ocean I do show

I border the shorelines of North America, Eurasia too
I’m the most shallow of the worlds five major oceans it’s true 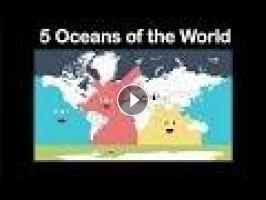