Life in Roman Britain | The Story of Britain | BBC Teach

mluff
Suitable for teaching 7-11s. An exploration of life in Roman Britain shown through the eyes of a Roman family. Part six of 11-part historical animated series, The Story of Britain.

Subscribe for more History clips from BBC Teach on Thursdays when we have them in: http://bit.ly/BBCSubscribeTeach

If you found this video helpful, give it a like.
Share it with someone.
Add the video to your own teaching playlists.
Create an account, subscribe to the channel and create playlists for different age groups, sets and syllabuses.

Follow us on Twitter: http://twitter.com/bbc_teach
=====================
Life in Roman Britain is shown through the eyes of a typical family. The Romans bring towns to Britain, and also roads, forts, and Hadrian’s Wall, to keep out the Picts. The father is supervising the building of Hadrian’s Wall, while the son manages to lose his father’s special military scarf, or focale. This incident is used to explore Roman beliefs and religion, food and entertainment.

This clip is from the BBC series The Story of Britain, a compilation of animated shorts exploring British history from the Mesolithic period to the Domesday Book.

Pupils could be asked the question: what did Romans do for us? They could use the clip – and any other sources they have – to make a list of all the things changed in Britain by the Romans. Once they have a list, students can decide whether these changes were changes for the better, or for the worse. Did they make life better for everyone, or not? Encourage students to reflect on their own lives and the impact of Roman rule on British culture by making a presentation for the rest of the class on what the Romans did for them.

=====================
Subscribe to create your own customised playlists, and get notified about our latest clips. As we have them, new videos will be uploaded on the following days:

Life in Roman Britain | The Story of Britain | BBC Teach 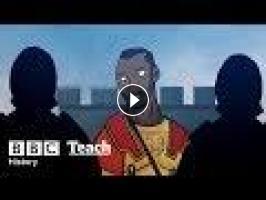 Suitable for teaching 7-11s. An exploration of life in Roman Britain shown through the eyes of a Roman family. Part six of 11-part historical animated...