ohadden
In this kids learning video your child will learn about Amelia Earhart. This is a short biography on Amelia Earhart for kids during Women\'s History Month.

This is Amelia Earhart. She was born on July 24, 1897, in Atchison, Kansas, at her grandparents’ house. Soon after her birth, Amelia’s parents separated. Nevertheless, Amelia’s sister, Muriel, was born two years later. Amelia’s early years were spent with her wealthy grandparents. The two girls lived with their grandparents until Amelia was ten

Growing up Amelia and her sister had all sorts of adventures. They collected insects and frogs. They liked to play sports including baseball and football

Amelia\'s first \"flight\" was when she was just seven years old. With the help of Muriel and her uncle she made a homemade roller coaster. After crashing dramatically she told her sister that it \"was just like flying\".

In 1917, Amelia entered a nursing school and witnessed the horrors of war. She served as a Voluntary Aid Detachment nurse at a military hospital during World War I until the Armistice in November 1918.

In the fall of 1919, Amelia enrolled as a pre-med student at Columbia University. In 1920, her parents had reunited in California. Amelia decided to leave Columbia and join them. Amelia’s love for aviation, or flying airplanes was born when her father took her to an aerial show where she got to ride in an open-cockpit flight over Los Angeles.

Amelia worked hard and, together with some money from her mother, she was able to pay for flying lessons. Eventually she purchased her own plane. A bright yellow airplane she nicknamed the \"Canary\". She also got her pilot\'s license and set a new altitude record for female pilots of 14,000 feet


On May 20–21, 1932, Earhart accomplished her goal of flying solo across the Atlantic Ocean. She took off from Newfoundland, Canada. on May 20, in her Lockheed Vega. Her flight was filled with dangers, from rapidly changing weather to a broken altimeter so she could not tell how high she was flying, to gasoline leaking into the cockpit. At one point her plane dropped almost 3,000 feet and went into a spin and flames were shooting out of the exhaust manifold. She brought her plane down on the coast of Ireland after a harrowing trip lasting 15 hours and 18 minutes.

The flight was the second solo flight across the Atlantic and the longest nonstop flight by a woman—2,026 miles as well as the first flight across the Atlantic by a woman. President Herbert Hoover awarded her the National Geographic Society Medal on June 21, 1932, for her achievement, and the U.S. Congress awarded her the Distinguished Flying Cross, the first woman to receive such an honor. Earhart\'s accomplishment meant a great deal to the entire world, but especially to women, for it demonstrated that women could set their own course in aviation and other fields.

In 1935, Amelia started planning for an around-the-world flight. On June 1, 1937, Amelia Earhart and copilot Fred Noonan again set off to fly around the world.

. However, trouble lurked for Amelia and Fred. Shortly after Amelia left New Guinea on July 2, she sent several distress calls. While her distress calls were received, Amelia could not hear the return messages because she could not find the correct frequency on her radio. Amelia and Fred were off course and lost over the vast Pacific Ocean. They did not have enough gas to reach their target—Howland Island. Amelia and Fred would never be seen or heard from again. President Roosevelt sent nine naval ships and 66 aircraft to search the area. On July 18, the search was called off.

Hope you enjoy this Amelia Earhart biography for Elementary students. 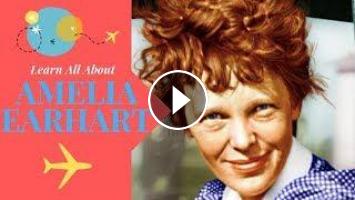 In this kids learning video your child will learn about Amelia Earhart. This is a short biography on Amelia Earhart for kids during Women\'s History M...