mluff
In this video we are going to know everything about the roman empire. As we always tell you, it is very important to know the past, to understand the present and improve the future.

Legend has it that Rome was founded by Romulus and Remus, two brothers who had been raised by a wolf. But that\'s just a legend ...

Rome was founded almost 2800 years ago with the union of several villages in Italy. At first it was a monarchy, those who commanded were the kings, but later it became a republic. Do you know what that is? A republic is a form of government where there are no kings but politicians make the decisions they think are convenient. The Republic of Rome lasted several centuries until about two thousand years ago when, what we know as the Roman Empire, began. In an Empire, all power is in the hands of an emperor who is like a King of kings.

The Romans conquered all the nations of the Mediterranean: Greece, Egypt, Syria, France, Germany and also the Iberian and Celtic people of Hispania. They even arrived in Britannia, now known as England. But…

How did the Romans live?
Roman society was divided into several groups. The patricians were the nobles, they had a lot of power. They were politicians and military men, rich and powerful. Below them were the plebeians, the people. They were farmers, artisans and workers in general. And finally, in the lowest part were the slaves, who used to be prisoners of war.
War was a very important activity for the Romans. Their armies were huge and formed by fearsome soldiers called legionaries. Thanks to them they conquered all corners of the Mediterranean.

The Romans were also great engineers and architects and created very orderly cities with many amenities. They had aqueducts to carry water from one place to another, bridges to cross rivers, circuses, theatres, spas and schools! Roman children went to school, like us! They also built roads, which were roads that made it easier to get from one side of the Empire to the other.

The Roman Empire ended in the fifth century when the Germans invaded Rome. It was at that very moment, with the fall of the Empire, when the Middle Ages began. but that\'s another story. As we always tell you, it is very important to know the past, to understand the present and improve the future, do not you think? 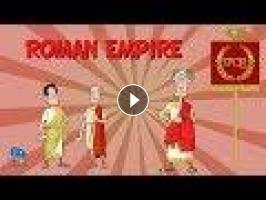 In this video we are going to know everything about the roman empire. As we always tell you, it is very important to know the past, to understand the ...