All Hail the King! What is a Monarchy? | Politics on Point

Hwilliams
Nick\'s got the scoop on one of the oldest forms of government - the monarchy.

[Nick] Hear ye, hear ye, by decree of her Meow-justy Queen NewsCat, I will now explain to you monarchies. That\'s a fitting way to start talking about Kings and Queens, right?

When you think of monarchies, your mind might automatically go right to medieval times, noble leaders protecting their people, or greedy malicious conquerors, who only look out for themselves.

However, just like other forms of government, monarchies have gone through plenty of changes over the years and still exist to this day. A monarchy is a form of government in which power and authority are held by one ruler or Monarch for life. They usually get some help through a close-knit circle of family members and advisers.

Way back in the day, a monarch would come to power through leadership achievements, such as conquering land and managing resources. They\'re supposed to rule that land with their people\'s best interests in mind.

Once a monarch is set up, the power tends to pass from one generation to the next, from the King to his son, and from that son to the son\'s son, and so on and so forth. This means monarchs were usually born into the position rather than being chosen.

The middle ages shaped monarchies into what many know them as today, heavily influenced by religion. Kings acted as though they were chosen by a higher power to guard their people\'s wellbeing. There\'s even a name for it, \"The divine right of Kings.\"

If a monarch were to hold total and complete power on their own, this is known as an absolute monarch. You might be able to see where this could go wrong. One person with all the power, the idea of a monarchy, is to have one leader that represents the people and acts in their best interests. But what if the person in charge has some ideals that the people don\'t like?

Revolutions by the public have resulted in many monarchies changing into limited monarchies. There is still a monarch, but they don\'t get to decide everything.

Today, the most well-known monarchy around is the British monarchy. It\'s one of those limited kinds technically called a constitutional monarchy. So they still have a King or queen, but they also have a constitution that outlines the country\'s rules and laws.

Some people have argued that it\'s time to do away with monarchies, but based on how the British loved their leader, it seems like a government form that will be around with us for quite some time.
---
NewsDepth, a weekly interactive television program produced by WVIZ/PBS ideastream, breaks down the biggest news stories into teachable lessons for 4th to 6th-grade students.

NewsDepth is in its 50th season and has become a trusted and loved free resource for hundreds of teachers across Ohio. The show has also been recognized by industry professionals, having received multiple regional Emmy awards and two gold seals from the Parents’ Choice Awards.

Full half-hour episodes of NewsDepth are broadcast on multiple PBS stations across Ohio and are available 24/7 on https://www.ideastream.org/newsdepth.

All Hail the King! What is a Monarchy? | Politics on Point 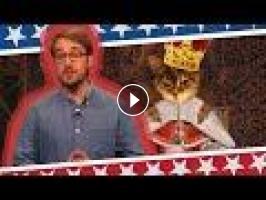 Nick\'s got the scoop on one of the oldest forms of government - the monarchy.Read the script:[Nick] Hear ye, hear ye, by decree of her Meow-justy Que...